Back in July 2022 student Seb Lievano (pictured) came to The Marlow Language Centre for his work experience week. As a budding linguist, we asked him to sit in to observe some classes with a view to telling us how face-to-face MLC Group classes might differ from the classes he takes at school as a Yr 10 student. His feedback was very insightful and he was kind enough to share his experiences below. 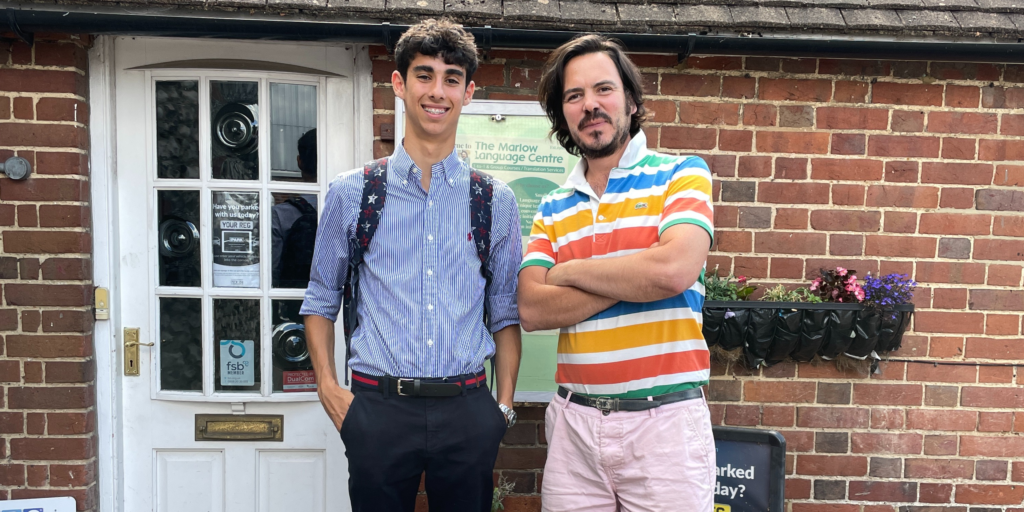 As a Year 10 student, I am still currently going to school, and I take French as one of my GCSE subjects. I did some work experience at The Marlow Language Centre because my mum is a Spanish teacher here and I have loved every minute of it. During this time, I have attended a few classes and I must admit this is very different to normal school. I have found it very impressing how much the students here have learnt in such a short period of time.

A personal recommendation for me would be Jean-Michel’s French classes and this is just because of the amount of vocabulary and phrases that I learnt from that ONE lesson. A lot of people are worried or anxious about joining a classroom-based group but there is nothing to worry about. I saw that not only were the students learning a lot from the class but also it was a very good way to socialize with other people. The fact that the teacher (Jean-Michel in this case) only spoke to us in French allowed us to understand how it would seem if a completely fluent French person were to speak to us.

It’s the little details like this that make these classes a lot more different and better than a random school lesson. Having a teacher that teaches their native language can help as it can develop your vocabulary to a higher level and that level cannot be achieved in school.

The variety of teaching techniques allows you to discover what works best for you and what can help you progress in the language you want to learn.

A lot of people from my school say the exact same thing about languages and this is what they say, “Why should I learn another language when there is technology like google translate?” or, “What is the point in learning Spanish if I am never going to go to Spain”. Now they have a point when they say this but, I think that there is a certain feeling of self-pride when you finally master a language you have been struggling with a language and using things like google translate is just not the same.

At The Marlow Language Centre, your choice of languages varies from core languages like English, French and Spanish all the way to Japanese, Swedish and even Russian because you never know if you are going to need a language or if not knowing a language can limit yourself without you even knowing it.

Each language that is taught here at The Marlow Language Centre is taught usually by a teacher that is from that country and fluent in the language so that you get the best possible experience.

I am fluent in Spanish and English and I take French at school not necessarily because I absolutely love it but because once you have one language like Spanish, other languages like French and Italian become easier so try to chose a language that is similar to your native language or if you want a bit more of a challenge (which I recommend you do) go for a language completely different because you never know when it might benefit you or you might need it. There are many different levels to learning a language. For example, intermediate. If you are in the intermediate section, you will be put in a group with other intermediates without getting held back by people that have a lesser understanding of a language than you or vice versa. There is also a very wide diversity of age in these groups but that doesn’t make much difference at all. I feel that if you do end up in a group it is the best experience possible because if you are face-to-face, you get to know your classmates as you progress in your language together. Also, the groups are not that large in numbers. The average number of people in a group is 3-4 and the maximum number of people in a group is 8 so there isn’t actually that many people which can make it easier to learn the language.

Besides, it’s never too late to learn a new language and you could end up being amazing at it (that is if you go to The Marlow Language Centre to learn it).

I have very much enjoyed my time at The Marlow Language Centre, and I can see myself coming back to learn a different language like Italian or German in the near future.”

Find more information on our one-to-one or group courses on our website.